Once again I woke up before my alarm went off. Made my coffee and said a few morning prayers, but not nearly as many as I say at home, due simply to time constraints in the mornings and exhaustion in the nightimes, which has been the case virtually every day. This has bothered me a few times during this trip, and I’ve had to reconcile myself by telling myself that much of this trip has had the purpose of encountering Christ in the people of Tanzania and glorifying Him in our encounters and efforts here, and I needn’t be too scrupulous in worrying about not saying more of my regular prayers every day.

After taking my usual morning shower (blessedly w/ hot water again – 😊) and dressing, I met Fr. John and the ladies at 8:45 a.m., and Fr. John took the ladies and me back to the diocese. (Anthony, Scott and Jay had left earlier to get an early start on the vehicle project.).

When we got there, the ladies went straight to the sewing shop, and I went straight to Fr. Matthew’s office. Neither Fr. Matthew nor his secretary was there, but the office was open. However, when I went inside and pressed the light switch, the light didn’t come on, and after checking for any illuminated lights on Fr. Matthew’s computer and printer, I confirmed that there was no electricity in the building. I also learned that there was no electricity throughout the diocese. I saw Fr. John park his SUV in front of the building housing the bishop’s office, which is adjacent to the Development Department building. So I walked over there, met Fr. John as he exited the building and asked him if he would take me back to the hotel.

I wanted to go back to the hotel and do my journaling, because my computer battery wouldn’t hold out long enough without electricity to recharge it. Fr. John was going back to his home in Isole today, so he agreed to drop me off at the hotel on his way out of Geita. He was using Fr. Matthew’s Ford Explorer, and it needed fuel, so he asked me for some cash from our group funds. He also said he needed to call Fr. Matthew to ask whether Fr. Matthew’s Explorer uses petrol (gasoline) or diesel. I assured him that Fr. Mathew’s American-made Explorer uses petrol. In addition, I was with Fr. Matthew the day before when he purchased fuel, and I heard him request petrol of the filling station attendant. (In Tanzania there are no self-service stations.)

A word about the group funds: At our last group meeting in Colorado before we left , Fr. John had asked for each of us to contribute to a fund to pay for such things as tips for the diocese’s drivers, fuel for the vehicles in which we would be chauffeured, etc. Then Fr. John asked me to be the collector and treasurer of the fund. Later, after we got to Tanzania, Fr. John told us that we needed to put together a second fund to reimburse Fr. Matthew for airline tickets and baggage fees for our round-trip flights between Dar es Salaam and Mwanza, for which Fr. Mathew had paid before we left Colorado. Fr. John asked me to be the collector and treasurer for that fund also. It wasn’t until yesterday or the day before that Fr. John asked me to give him some of the money from the fund to tip some of the drivers, so I’ve been carrying that money around with me this whole time and was relieved to have Fr. John start asking me for some of it.

After Fr. John dropped me off at the hotel, I ended up working on my journal until 3:45 p.m. Then it was time for me to head back to the diocese to meet up with whoever was going to take me to the Geita Secondary School for another meeting with the students there. I asked the front desk clerk to call a taxi for me to take me back to the diocese. When the taxi came, the driver didn’t seem to know where the diocese was, so I had to direct him to it. It was only about two and a half kilometers from the hotel and required only three turns. Once the driver saw the spires of the cathedral, he realized where we were going.

When we got to the diocese, I went to Fr. Matthew’s office, but he wasn’t there. I asked his secretary if I could have one of his cell-phone numbers to give him a call. She asked me to write down my name, phone number and e-mail address first, which I did, and then she gave me a number for Fr. Matthew. I called him, and he told me he’d be at his office shortly to pick me up and take me to the school. It was 4:00 p.m.

I walked outside to wait for Fr. Matthew and saw Eleanor who had just walked over from the sewing center. She told me that Jill wanted me to visit the center to see the progress that had occurred there. She agreed to wait there for me in case Fr. Matthew showed up while I was at the sewing shop.

When I got to the sewing shop, Jill showed me examples of what the women there had created in the way of dresses, market bags, blouses, and wallets/cell-phone cases. The women were clearly advanced beyond capabilities our ladies had anticipated and had really shown our ladies a lot of talent. Tabitha, a young lady from the orphanage, was very talented in design and helping others. Beatrice, who has a diploma in community development, became the ladies’ interpreter. Ezekial, who is a tailor, was constantly working on adjusting machines and fixing belts on the old treadle machines. One lady in particular, Adventina, was great at replacing rubber belts with stitched and rolled cloth belts. She also took the ladies to market to shop for fabric. They are a creative group of many and need many more new machines.

As for the vehicle repair project, by the end of the day on Wednesday, Scott reported that after a tough time getting parts, things really started to come together by Wednesday. There were several cars being inspected for needs, while others were quickly put back together by the 15 students from the school. We wish there were better news on the brick machine, but after finally getting parts and having an expert show up, we unfortunately had no power. Hopefully more progress will be made tomorrow.

After meeting with Jill at the sewing shop, I went back to Fr. Mathew’s office at 4:30 p.m., and Fr. Matthew and Jay drove up about that time. Jay was going to accompany me to the secondary school for my meeting with the students there. Fr. Matthew dropped us off at the school, and the principal, Brynton, showed us to the same classroom in which I had met with the students on Monday. The classroom seemed much more crowded today, and I learned to my chagrin that indeed it was. I had anticipated just under 50 students and had brought enough candy, which the Tanzanians call “sweets,” for 50 kids. The topic I had planned for today was the Ten Commandments. I talked to the students about the commandments and how to live them, and when I finished at almost 6:00 p.m., several of the students had some very good questions for me to answer. By the time I had answered many questions, our time had run out. Jay and I started handing out the sweets but ran out before we gave some to every student. I felt bad and apologized to the students and asked those who had candy to share with those who didn’t. I was happy to see that several of the students began sharing what they had with others who had none.

A taxi was waiting for Jay and me, and Brynton rode with us to the hotel. I then went to my room to try to do some more journaling, but I wasn’t able to do much of it before it was time to shower and dress for dinner. We were scheduled to have a farewell dinner at the diocese, and at 7:30 p.m. Fr. Matthew was going to pick us up. I found Fr. Matthew’s car in the driveway in front of Scott’s room, but neither Fr. Matthew nor anyone from our group was there. I rang the doorbell at Scott’s door, and when Scott answered, he suggested I check the bar just down the driveway. I did and found Fr. Matthew there having a beer. I decided to have one with him, and when we finished our beers, we headed to Fr. Matthew’s Explorer. A second vehicle was needed, but within minutes all of us, except Anthony, who had stayed at the diocese, and Chris, who had a cold and decided to stay in, were at the bishop’s house.

What followed was a wonderful dinner on the lawn, as we had had our first night at the diocese. Many of the diocese’s Development Department staff were there, some sisters, Jenny and Suzie, Maria, Fr. Angelo and others. Anthony showed up a little later, after having worked late at the co-tech center with the vo-tech students on vehicles. The evening went very much as the evening at Fr. Matthew’s parish had gone the night before. A wonderful meal was provided, after which we were given gifts of beautiful shirts for the men and dresses for the ladies, all emblazoned with large giraffes, which Fr. Matthew said were symbolic of peace. 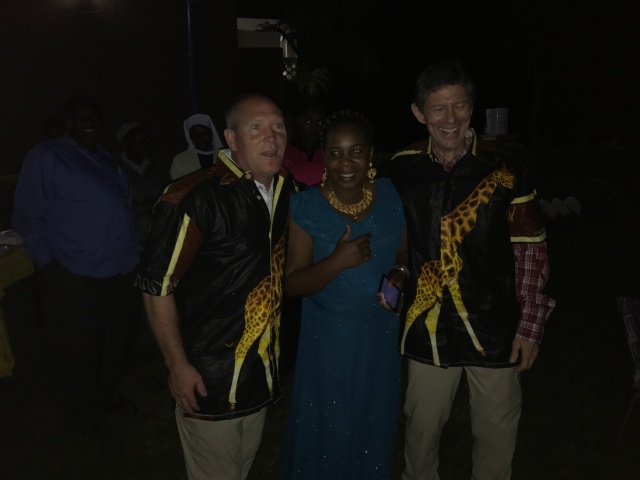 Once again, all present spoke about the relationship we Americans and Tanzanians had developed, and we Americans promised to come back again next year. (I fully intend to do so, and I hope Theresa will come with me.) By the time we had finished our speeches, it was late, and we in our group needed to head back to the hotel, from which we were going to check out at 8:00 a.m. I got back to my room after midnight, reorganized my bags for tomorrow’s departure, and collapsed in bed around 1:30 a.m.
Salty