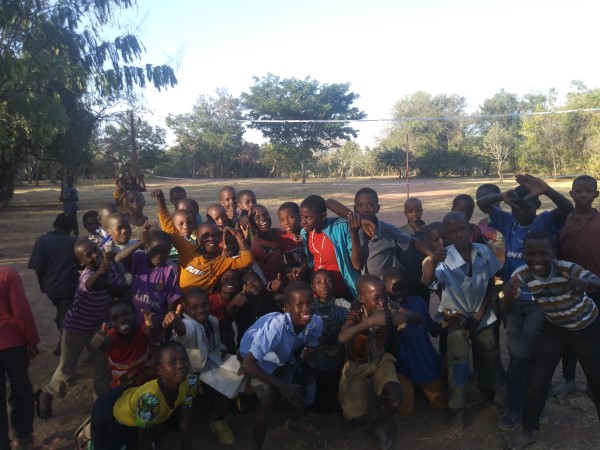 Again our day started at 5:15.  Matthew was the first one up and ready.  He had been given a reading book to read the days reading and he was further preparing for his reflection.  We all arrived at ass a little early and actually were able to join the student toward the front of the church.  Today’s mass was in English and both Matthew and Tiana were to play a part. 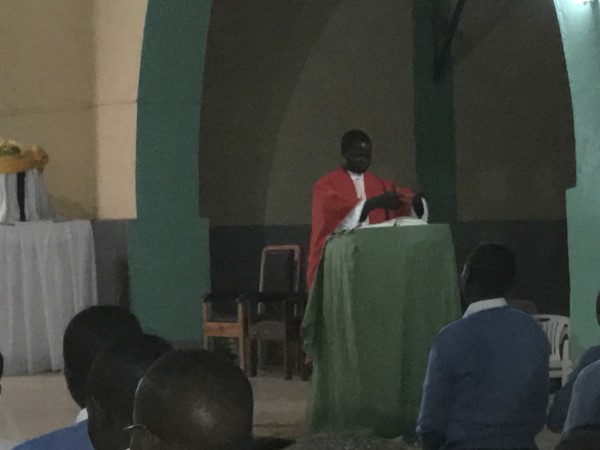 Tiana did the first reading and after an introduction by Fr. George, Matthew was called up to give his reflection.  It was the solemnity of Peter and Paul.  Matthew did amazing once he settled in.  He gave a great reflections in which he focused on the love of Christ and how our translation does not allow for the 3 different levels of love.  He then worked in asking each person to reflect on where Christ is at as afar as a priority in your life.  Well done, like a seminarian!

We then went to breakfast and Matthew, Tiana and Tatyna were schedule to teach class this day.  Matthew was teaching economics, Tatyna biology and Tian was supposed to teach Civics.  Tiana was unable to participate as she was feeling quite ill.

I was to continue on the stove project and work on Fr. George’s Ford Ranger.  I was asked to construct a special stove that would accommodate a 35L pot.  20 inches in diameter.  I separated from the children to start on my projects.  Fr. George and Fr. Salvatore, were conducting examinations of students that had been preparing for varying sacraments. 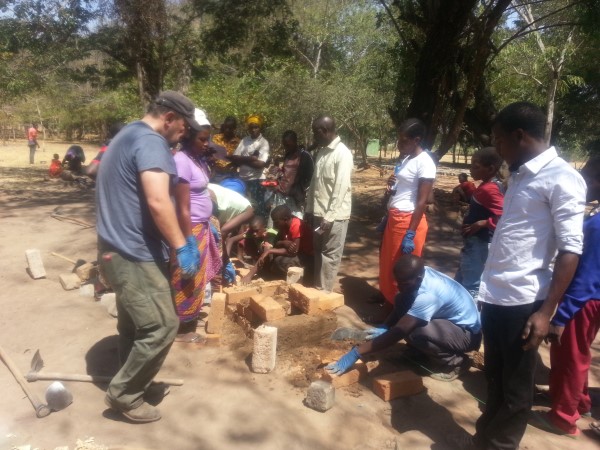 At about 2:00 we broke for lunch.  Tiana was feeling better and declined to be taken to be seen by a physician.  The pictures will show the change and improvement of her color.  After lunch the program was for us to attend a presentation by the students and then Tiana and Tatyna would introduce paper bead making.  I took the time to check on the progress made after I left, or maybe I should say lack of progress.  I had to go to the computer lab to research some issues with the injectors on Father George’s pickup.

At 3:30 I was retrieve to go to the presentation hall.  The students were packed and gave a presentation the demonstrated a dance of one of the 120 tribes that live in Tanzania.  Then a group of girls sang some songs and then the next group did an play in which each of four students playing a person that had visited Tanzania for the 1st time and were sharing their experiences.  At the conclusion, I passed out bubblegum, which the girls were very excited to receive.  Tiana and Tatyna prepared for the bead making. 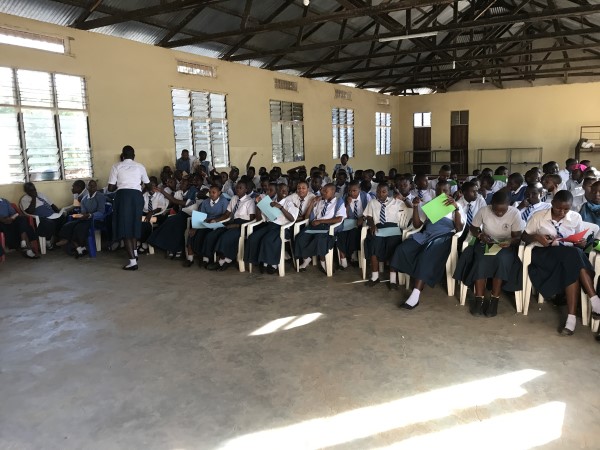 The bead making started at about 4:30 with a little bit of chaos.  Two pairs of scissors for 180 girls.  Wasn’t looking well.  I then asked two of the girls, Flora and Vero if they had suggestions for organizing the activities and to help Tiana and Taty.  They got everything organized quickly in a manner that would insure they could function.  They obviously are quite experienced at sharing. 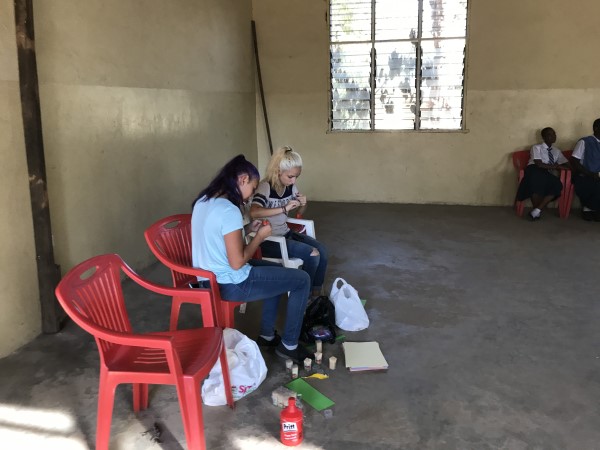 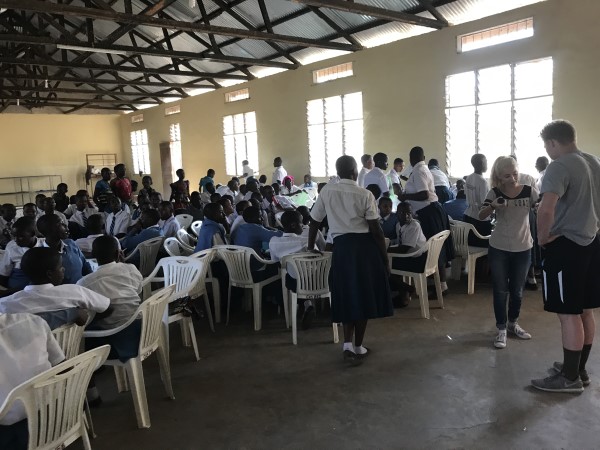 During bead making, Matthew asked if he could join me at the stove project to wrap up.  All of the cement was gone so I had to interrupt Fr George about getting some cement.  During that time, there were a couple of young children kicking a water ball like a soccer ball.  I encouraged Matthew to kick it back.  Once Matthew had kicked it, there were a large group of children gathered around him and before long, he was headed to the soccer field with the whole group and a homemade soccer ball.  I lost his assistance but what he was doing was much more impactful. 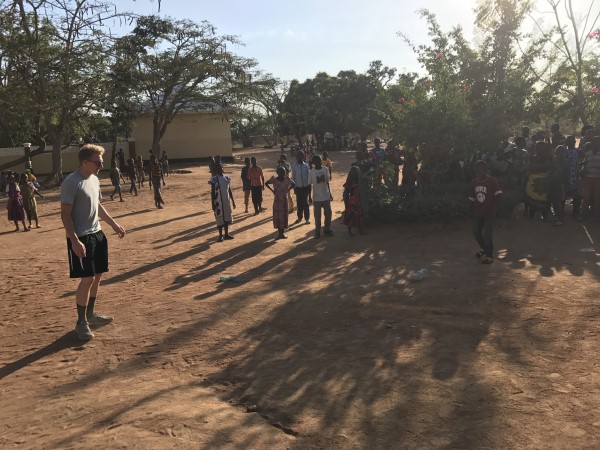 I got the cement and recruited a young man to help me finish the 3 stoves left.  I assumed it would take a couple of hours.  There is also a disciplinarian that is on the grounds and I recruited him to get me some help with getting some more bricks.  The older boys disappeared and with a few words a large number of girls that I am guessing were between 8-10, descended on the work area and went and got bricks carrying them on their head.  We completed our works at around 8:00 and then there were plenty of older youth that showed up to write there names in the cement as if they helped.  🙂  The joy was when I shared that 6 were ready for use, which equaled 12 cooking spots.  They were all taken.  It was amazing. 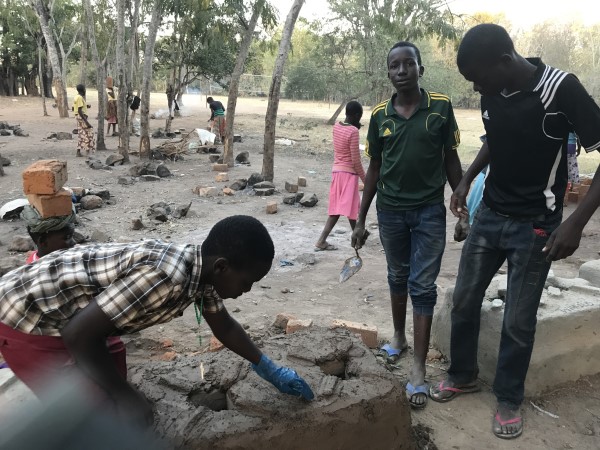 I returned to the rectory and Matthew and the girls were sleeping.  They had really had some long days.  We had dinner at about 8:30, which I woke them all up for and then they could not wait to get some sleep.  Tomorrow we leave for Geita and Fr. George is taking us to his family home for dinner on the way.