Today we were excited about the prospect of success. We did still have to get a fitting so we were not able to get started as early as we liked because the shops do not open until 8:00. The drive from our hotel in Sangerema to Fr Johns village in Isole is an hour and fifteen minutes to an hour and a half.

Below is our hotel the Golden Stardust 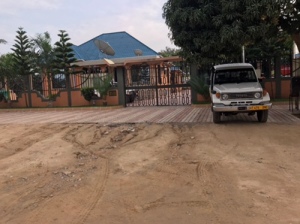 Sixtus Guvette, Salty Galvis and Floyd Foncannon are below at one of the shops.

Deacon Denny waits in our vehicle while we are trying to locates our part. 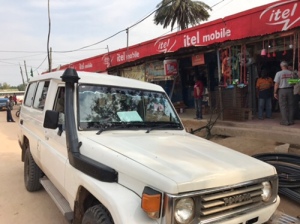 The challenge in buying something in Tanzania is there isn’t any type of directory online or otherwise to know where to get what you need. You have to go and look at the shops and ask who else might have it if they do not.

By 9:00 we were on our way to Isole. The drill operator was going to start first thing in the morning so we were hopeful that progress had been made past the 24ft from yesterday.

On our way to Isole we encountered two cow herders and their small herds. Evidently the cattle are territorial as we had to pause while and older and younger bull seemed to be having some issues. As we finally passed by the older bull was chasing the younger bull down the toad.

We arrived at Isole at 10:20. We have found that mid morning is tea time and breakfast. We have to eat before we start work.

Below is Lilian, a niece of Fr Johns as well as Justina another niece. 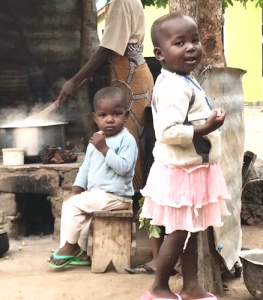 Below is Fr Johns mother holding Lilian after she ran in fear of the site of us.

Below, we are preparing for morning tea

After tea, we were headed to the drill site, about a quarter mile from the house. Floyd and I were going to stay while Dcn Denny, Salty and Sixtus went to Mwanza to purchase hose clamps and see if we could purchase a bit that we could make work on the rig. Floyd and I were planning to get the Venturi adapted so the Bentonite would be better mixed with the drilling water.

We spent time to connect the Venturi to the pump and were excited to see if it worked. As soon as we started the pump, a hose blew off and it was obvious that it was not going to work. It made a huge mess.

THANKFULLY no one was hurt.

Below is the Venturi that we have not yet adapted to feed the Bentonite into the drilling water. 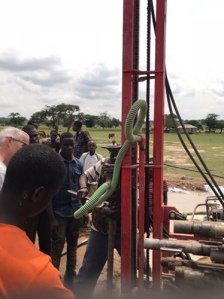 After our Venturi did not work. Everything was put back together. We began drilling and adding Bentonite into the water by hand. Dcn Denny, Salty and Sixtus left with Fr Johns brother Clement to get the casing that was arriving in Sangerema and make arrangements for the pea gravel that would go around the casing and then to Mwanza for a possible extra drill bit..

At 1:20, a coupling on the drilling rig broke. We could no longer continue drilling. Floyd took the broken coupling off and we took measurements and pictures to try and get to Salty or Denny. Since we arrived in Isole, there was virtually no cell service.

THANKFULLY today we were able to communicate with them.

We then walked up to find some shade. And it turned out it was time to eat again. As we waited to hear the status of the part, far John arrived with Augustine with the casing. 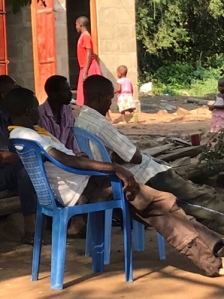 While we were waiting for the news, we got to spend some time with some of Fr Johns family members and those we had been working alongside. .

At 4:30 we received the news that it would be ten days for the part. We then pulled everything from the site. This would continue another day. 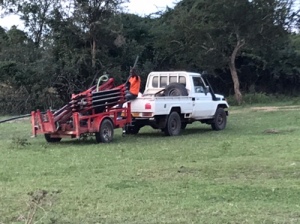 LORD, THANK YOU for this opportunity to be with this community.

We then left for Nyampande to have dinner with Fr Makonge, who has the best barbecue in the world.

THANK YOU LORD FOR THE GLORIOUS MEAL AND DAY.