Due to a shortage of available rooms at the Lenny Hotel Sunday night, Shemasi Denny (a/k/a “Masanje,” i.e., one who brings people together) and Salty (a/k/a “Chumvi,” i.e., “Salty”) enjoyed a night as guests at Bishop Flavian’s home at the Geita Diocese, where Fr. John had already been staying. Lisa, Floyd, Karen and Tony remained at the Lenny Hotel.

At 8:00 a.m. on Monday we participated again in a Mass in the Bishop’s chapel on the third floor of his home. Shemasi Denny served with Bishop Flavian at the altar, and Salty read the Old Testament reading and the Psalm. The only other participants were Sr. Mary, Sr. Tarsisius and Sr. Mercy, the controller of the diocese.

After Mass Lisa, Floyd, Tony, and Karen arrived at the Bishop’s house, and we all had breakfast with Bishop. Then we headed off to GGM, a/k/a Geita Gold mine for a tour of the mine. That was fascinating, and the mine reps were very hospitable and informative. We had a long orientation and safety presentation, and we learned that GGM is the second largest gold mine in Tanzania, with the largest open-pit mining operation. GGM works hard to be a good corporate citizen and seems to have a very good mining operation, with a serious focus on safety and an impressive safety record. Having first been started in 1936, with a cessation of operations from 1966 and a resumption of mining in 1996. The mine currently employs 5,500 people and has now produced eight million ounces of gold, which it works to produce at a current cost of $850 per ounce. Its major buyers are gold resellers.After the safety and orientation presentation, our main host, Isaac, a/k/a “Issa,” took us to see the mine’s emergency response unit. Floyd, being a firefighter, was very interested in that, and he was duly impressed with the mine’s Mercedes ladder truck, which had a telescoping ladder that is two feet longer than the ladder on Floyd’s truck in Loveland, CO. Floyd was also impressed with the ERU’s ambulance and EMT equipment.After seeing the ERU, we were off in two vehicles to view the open-pit mine site. I had seen it last year, but the size and magnitude of the pit is literally awe-inspiring, and I was impressed again with those. The earth movers, which are huge and have the capacity of hauling 150 tons in the smaller trucks and 250 tons in the larger trucks, look like match/box toys inside the pit. The pit superintendent had one of the large trucks brought up to where we were on the rim of the pit for us to see up close, and we were allowed to climb up a ladder to the cab of the truck. Floyd got into the cab in wonder. We took many pictures of us and the mine workers and then headed back to the administration building to take our farewell after five hours at the mine. 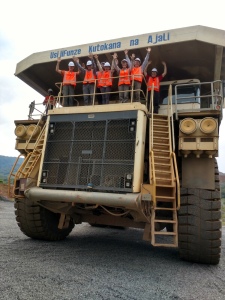 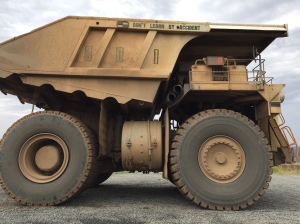 From the mine we went back to the bishop’s house to get our luggage and head out to Nyarugusu, the home of Fr. Matthew Bulala’s parish. 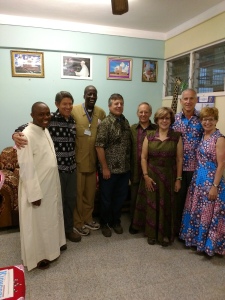 Fr. Gerald’s mother gave us a gift of shirts and dresses. Pictured here with Fr. Gerald and Fr. Thomas. 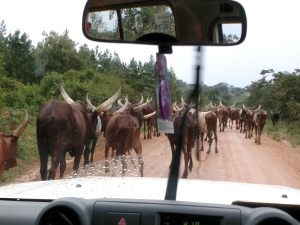 It took us the better part of a couple hours to get there, but when we did, Fr. Matthew and his congregation were waiting on the steps of St. Peter the Apostle Church and singing joyfully to welcome us.

It was about 7:00 p.m. when we arrived for what was supposed to be the 5:00 p.m. Mass. Shemasi Denny was to baptize nine children during the Mass, so Fr. Bulala had held off beginning the Mass until our arrival. The Mass was wonderful, boisterous, spiritual and uplifting, with the usual choral accompaniment. Fr. John and Fr. Matthew concelebrated with Shemasi Denny assisting in his usual role. Shemasi Denny also read the Gospel in Swahili and then preached the homily in English, with Fr. John translating for the congregation. Then it was time for the baptisms, which Shemasi Denny performed with assistance from Fr. Matthew.

Watching Shemasi Denny baptize the nine children, intoning the formula in Sawhili, “Nina kubatiza kwa jina la Baba na la Mwana na la Roho Mtakatifu” (“I baptize you in the name of the Father and the Son and the Holy Spirit”) was awesome.A new event for us to witness was that prior to the reading of the Gospel, parishioners processed up the main aisle with fire on the heads of two of them, a spear in the hands of another and a bow and arrow in the hands of another. This symbolized that the fire of the Holy Spirit was a weapon defeating the attacks of Satan. It was an amazing demonstration. 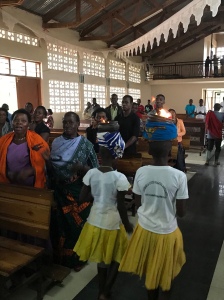 Following the celebration of the Mass, Fr. John and Fr. Matthew had us mzungus (white people) stand up in front of the congregation. Fr. John explained to the parishioners who we were and why we were there, and then each of us introduced ourselves individually.

Inside of St. Peter the Apostle

Outside of St. Peter the Apostle 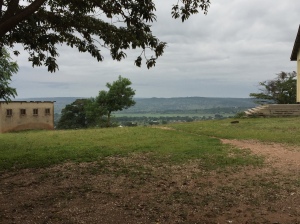 View from the church yard

After dismissal, Fr. Matthew asked us to process out of the church with him. Once we got outside, we were mobbed by parishioners who wanted to greet us, welcome us and have pictures taken with us. This all took about a half-hour. Then Fr. Matthew allowed us to go to the hotel in Nyarugusu at which he had booked rooms for us. The hotel, which I believe was called Nsangano, was very new, and the rooms were very nice and well appointed. In fact, they were the nicest hotel rooms we had stayed in so far.

However, the night was not yet over for us. After we checked in to the hotel, we went back to Fr. Matthew’s rectory, where Fr. Matthew and many parishioners had prepared a meal and a party for us in the courtyard of the rectory. 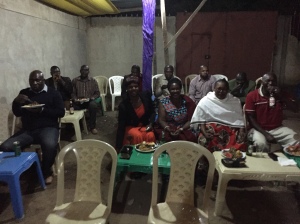 The food was delicious, and after everyone had eaten, Fr. Matthew asked everyone to stand up and introduce himself or herself.Fr. Matthew had a P.A. system set up, and after the introductions a D.J. started playing music. Noting that the locals were for the most part talking only amongst themselves, I asked Fr. John how to ask in Swahili, “Who likes to dance?” Then I stood up in front of the parishioners and asked, “Ambaye napenda kucheza?” That brought a laugh, but no one got up to dance, so I took the hand of one of the women and pulled her out to the floor between us and the locals, and we started dancing. Eventually many of us, particularly Karen and Lisa, many of the local men and women and even Fr. Matthew and Fr. John danced. After perhaps an hour or so of dancing, Fr. Matthew initiated speeches by his parishioners about parish life and the needs of the parish. We made some marks in response and then it was time for us to take our leave. (It was after midnight at that point, and we had another long day ahead of us the following day. I started handing out rosaries, was mobbed by the crowd anxious to get rosaries and finally managed to join our other folks in the car taking us to the hotel.